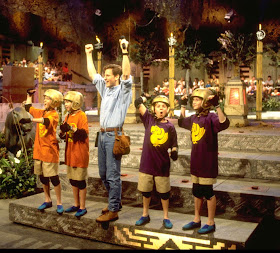 It’s been more than two decades since Alec Borden’s favorite game show went off the air, but the Braintree native’s effort to bring it back is just getting started.

“It’s one of the best game shows that ever aired,” Borden, 19, a student at Massasoit Community College in Massachusetts, told the Braintree Forum.

He’s talking about Legends of the Hidden Temple, a hit game show on Nickelodeon that first hit the air in the 90s. It featured teams of child contestants who faced off over a series of obstacle courses and challenges to reach the treasure inside a “mysterious Mayan temple.” Along with physical challenges, contestants had to answer questions based on lore about the show’s premise, and put together the Shrine of the Silver Monkey, a three-piece - but nearly impossible - puzzle. The series was hosted by Kirk Fogg, with Dee Bradley Baker (American Dad!) as the voice of Olmec.

Borden wasn’t born until after it ended, in 1995 after three seasons. But, he grew up watching reruns, and said he’s been a huge fan ever since. There are online forums for fans of the show, filled with adults who first watched it as kids and are waiting for it to come back, Borden said.

A TV movie based on the show’s premise, starring Isabela Moner (Dora and the Lost City of Gold, 100 Things To Do Before High School, Transformers 5), in addition to Fogg and Baker reprising their respective roles, which was released in 2016. Borden said he had a viewing party at his dad’s house the night it premiered. The movie has only encouraged his and other fans’ determination to put their favorite show back on the air, he said.

Borden’s launched a Change.org petition to convince Nickelodeon to reboot the show. As of Sunday (August 4, 2019), it had about 339 signatures. But if he reaches the right people, he said, he’s sure that together they can “double the game show’s episode count.”

Nickelodeon is in the midst of reviving some of its most iconic properties, including Rugrats, Blue's Clues, Rocko's Modern Life, Invader ZIM, All That, and Are You Afraid of the Dark?, and in previous years, has revived Double Dare, as well as Hey Arnold! and Legends of the Hidden Temple as TV movies.

Do you want to Legends of the Hidden Temple revived? Sign the petition at https://www.change.org/p/nickelodeon-reboot-legends-of-the-hidden-temple! The choice is yours and yours alone.

More Nick: Nickelodeon Embarks on New Direction with its Biggest, Most Wide-Ranging Content Slate Ever!